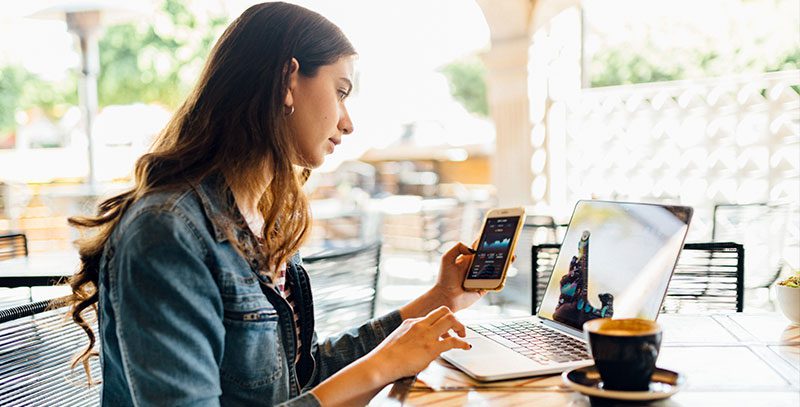 In general terms, e-commerce and mobile Internet are the macrotrends that will continue leading buying behaviors over the coming years. For example, Americas Market Intelligence (AMI) projections put annual growth in e-commerce at 31% until 2024, when the market will reach a volume of around US $611 billion. By then, the marketplaces will account for 48% of all retail sales in the region (both online and offline), according to AMI forecasts. At the same time, Internet users in Brazil are already spending 91% of their online time on mobile devices, followed by users in Mexico (89%), and Argentina (86%), according to Comscore. The firm GSMA estimates that, by 2025, mobile penetration in Latin America will be at 73%.

Among these macrotrends mentioned, specific changes have taken place in the behavior of Latin American Internet users. We have identified several of these changes that marketing professionals might want to leverage in their campaigns throughout 2022.

#1: Mercado Libre is the Most Used Marketplace by Online Consumers in Latin America

Looking at the traffic to marketplaces by country in Latin America, a study by SEMrush and Punto Rojo again highlights the leadership of Mercado Libre, but this time over marketplaces with a local impact, like Falabella in Chile, and Personal in Argentina. Mercado Libre’s share in Argentina is the highest: 81.98% of monthly traffic from Argentine online buyers goes to the domain mercadolibre.com.ar. It is worth noting that the Semrush and Punto Rojo study did not include Brazil.

The Media Reactions study by the firm Kantar confirmed Mercado Libre is one of the most effective advertising platforms in Latin America. Mercado Ads (a Mercado Libre product) recently launched its programmatic advertising interface Audience Deals, which is able to segment users of the platform by their interests, and reach them outside the marketplace.

#2: Internet Users in Latin America Are Watching More Videos Than Ever

According to the study, among Internet users in Latin America, the peak time for watching videos is between 7:00 p.m. and 10 p.m. There are also four key segments among these viewers:

There are two main for marketing experts to leverage video content. The first would be through the AVOD (advertising-based video on demand), a video consumption model favored by 70.4% of Latin American Internet users. In that regard, marketing experts can show ad content on free video streaming platforms, such as YouTube, Pluto TV, VIX, and DailyMotion.

The second would be through the actual creation of videos, either for organic dissemination, or for advertisements. According to Biteable, YouTube has the highest return on investment in video content, (35%) followed by Facebook (26%), and Instagram (18%). In turn, practice has showed that video ads have higher engagement. Meta, formerly Facebook, cites striking cases, such as that of Totalplay, a company that achieved a 41% increase in sales after it first introduced video ads.

Another interesting tactic is leveraging content creators or influencers for the production of branded content in video format, which we explain in more detail in our article on top digital marketing tactics.

#3: Internet Users in Latin America Prefer to Get Their News Online and via Mobile Devices

In Latin America, 83% to 87% of Internet users get their news online, and 73% to 83% of audiences in each country do so through their cell phone, according to the Reuters Institute’s Digital News Report 2021.

Below are the top five favorite news websites, broken down by country.

The marked interest of Latin American Internet users in keeping up with the news means they can be reached with advertisements that really connect with their interests.

For example, it is possible to set up programmatic advertisements on news websites with greater potential traffic toward specific niches or interests. Many of these websites have their own advertising or are partnered with the Google Ads AdSense network. The browsing data stored by some websites enable these Internet users to be reached on their social networks to target specific remarketing campaigns at them.

#4: Internet users Are Diversifying Their Payment Methods and Use of E-Payments Is Growing in LatAm

Financial inclusion in e-commerce is expanding due to the boom in financial super-apps and banking-as-a-service. Financial services like Mercado Pago allow users to store money securely and make online purchases, or offer guarantees to sellers. In Mexico, the use of cash dropped by 23% in those SMEs that incorporated Mercado Pago as a financial solution, according to the report by Mercado Libre and Euromonitor.

Similarly, some apps, like RappiPay or Nequi, allow Internet users to open debit accounts with little or no ratings. This makes it possible to upload money to the cloud and to request or receive payments. In fact, AMI forecasts show digital bank transfers will account for 9% of total e-commerce expense in Latin America by 2024, and in Brazil, annual growth in bank transfers will be 94%.

Lastly, a boom is anticipated in the adoption of cryptoassets or in blockchain-based financial solutions. Studies by AMI show that 8% of the Latin American population are already using bitcoins and altcoins. According to AMI, 56% of consumers interested in crypto would like to buy these assets through trusted international brands like PayPal, Visa, or Mastercard.

For many brands, the payment method they offer constitutes a selling point to their customers, and they display it with pride on their website or in their advertising. In Brazil, Pix accounted for 38% of consumption in 2021, even “cannibalizing” options such as boleto bancário, according to AMI research. Similarly, the use of SINPE Móvil in Costa Rica tripled in 2021, which represented a $5.6 billion shift from cash to electronic money.

Some models like “buy now, pay later” are becoming enticing to Latin American consumers (50% of purchases in Latin America were made using this method in 2020, according to AMI), and can be offered securely through certain providers. In fact, this model is already famous in the United States, with success stories like AfterPay.

This trend is also contributing to reducing the financial risk that online buyers perceive. According to Mastercard, 75% of Latin American buyers claim to have been the victim of a cyberattack, and 20% said a company leaked their personal information. Worse still, 70% of Internet users distrust the ability of sellers to keep their data secure.

These data therefore suggest companies should not only expand their payment options, but also announce these changes in their campaigns in order to attract more customers.